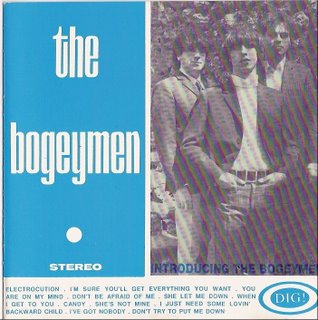 "The Bogeymen's style and personnality was brought up in the days of Pearly Spencer, the decade when negro pop was aired on pirate radios and rock'n'roll could be commercial yet controversial at the same time. Rickenbackers and Gretsch, Stones, flashy duds, the first WHO album, limonade and café express, toying with amplifiers, trying to sing like Little Richard, wrecking organs and buying new used ones, doing bottom-of-the bill gigs for big-wiggged lousy acts with synthetizers...!

Well, that's The BOGEYMEN reality, a rough time to be a band so dedicated to playing for fun and musical delight only ! (...)" (Dan Elektro, from his liner notes).

The Bogeymen originally emerged via an ep on FFascination in 1992, (FF004) at the same time their first CD came out. But it was this 1st album on Dig Records that achieved the thing. A good paper on the french fanzine Larsen, and the legend was launched.
Some gigs after, every fan of 60's stuff, Pop, rn'b or Garage was conquered. They were incredible !

Listen to You are on my mind
(FFfascination 1st single version, slightly different than the lp's one)

This 1st effort was followed by a bunch of singles and eps (Guess who, Snap records, Detour...) but the amateurs were a bit disappointed by the bad sound quality of this CD. Too much treble spoiled the pleasure.
Stephane of Dig Records soon produced the second coming which was a big hit again and installed the band as the main french act (with the Squares, and the Jekylls, and... in fact so much, I'l be back later) of this period.
The sound was this time ok and "à la demande générale", a limited vinyl edition saw the light on the same label.

Laurent Bauer, the songwriter and LEADER don't take so much time to leave the band, creating rapidly a new one : The Lost Minds, making a brief carreer in England, before wanishing in the psych-pop-electronica scene . (apparition on the Mellow's "Perfect colors“ album in 2004).
Since that, the Bogeymen albums solded out and began hard to find (at least the first).

So... enjoy this one, the true beginner, and one of the cultest French r'nblues album (of the 90's) !!
(singles and eps will follow if you ask for !) 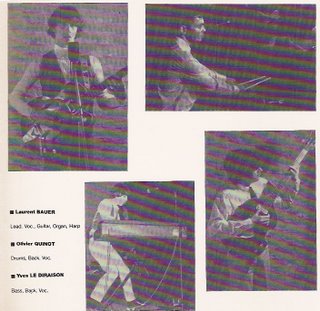 Thanks !
It reminds me of Greenfish and The Jekylls (from Dig Records too).

PS : There is an unreleased track of The Bogeymen ("Just a dream") on a Larsen mini-CD; I assume that you already have it, if you don't, I can upload it.

thanks for the effort! interesting band.

if only the mp3 encoding wouldn't be so terrible...

Yes, but even if more more Rnb !
Thanks for the proposition Chris , but yes, I have all the disco of the band (official singles + fanzine tracks). I have also a good unreleased live of the Bogey, and a wild video of a gig too. I think puting it sometime on the blog and some on Youtube . Concerning the sound, it came from the original poor CD.
About the future postings, I'm thinking about perhaps some live : Jekylls, Squares, DM3, Strawberry smells, Pickpockets, Kek 66, Knave, Breadmakers... some freebies.... ???

Thanks a lot for the Bogeymen! They're very good. Remember they appeared on a That's Entertainment comp roughly 15 years ago. Those were good times. Never understood why they appeared on a comp with otherwise just Norwegian acts though - was there a connection of some sort?

Also, you write: "singles and eps will follow if you ask for !)"

I guess the momentum's gone now as this is an old post, but if there should ever be such a post... well :)

I'm unzipping the other rapidshare files and look forward to hearing them all. Many thanks for your selections!

Hi!
Thanks a lot for your work. I am new to this blog,
could you re-upload de Bogeymen link? Because it has been deleted by rapidshare.

Thank you R. and Agus for your last comments. I am not so often at home, so that explains my silences.
Yes, I am going to re upload the album file and I promess, the singles will follow soo. Keep in touch !
ps : The connection with the northway compilation is that there was a member from this countries at that time in the band. (and the talent of the Bogeymen had well sorted with the rest of the vinyle, obviously).

I got this buried in a box somewhere. I haven't heard it in years. Maybe i should dig it out.

Hi! I have just found your blog entry on the Bogeymen. I used to love that record, but never got around to buying it, and then lost the cassette. Got Action time! but now I wish...
Any chance I could receive a copy of the CD ? I would be happy to participate with postage if that's ok.
Thanks
Stéphane