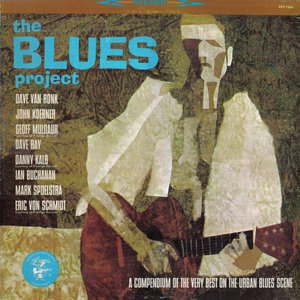 Seems some albums have gained a cult status among the afficionados of "good" music. And the blues amateurs have their own.

"The Blues project, a compendium of...." is one of these nuggets, and if some vinyl copies of this 1964 Elektra compilation are seen regularly on the net, at correct prices, it makes bigger surprise to not find it on the sharing blogs communities .

After "the Blues project live at the cafe au gogo" posted some years ago on this same blog, and continuing my search of blues  and folk "goodies",  I'm proud to share with you this excellent album, which demonstrates, among others, the early efforts of a great 60's boom guitarist and leader : Danny Kalb of the same named "Blues project's band.

Enjoy the record (even if very scratchy and jumping at least on the superb Kalb instru on the  B side*), and the liner notes. These, wrote by Paul Nelson are very helpfull to understand the blues as it was seen at the times, and the work that some young white men were practicing in order to "save" what Nelson describes as "the good old days" the black community wanted on the other hand to overpass.

Thanks in advance to all the rights owners, who will understand, I'm sure, the interest of sharing this.
This lp is actually not commercalised, in any form, and have never been issued on CD.

(*) But a cool different version of this song was re-recorded by Danny on his "All together now" album, and is enjoyable on Spotify.

sorry, couldn't find the link - anyone help me with that?

Sorry. I'm on the go caus had some problems yesterday night with my connection. Will be ok in max one hour now.

can you please help me with the password.....thank you!

link don't work too bad???? please tell me what this means as to the password problem....has anyone else run into this?....I could use your help here....thnaks,

Yes. Pw IS "wtai". Remember it guys and girls. It's wrote on right collumn.
Ps : And sorry, forgot to publish the back sleeve notes.
Will follow tomorrow, caus it's very interesting. Thanx for your visit.

Thank you, thank you, THANK YOU!! I bought this record when it first came out and used it to teach myself how to play guitar ( kind of ). This brings back many, many memories of the '60s, when I was young. Merci beaucoup!