The Blues Project live at the café au go go 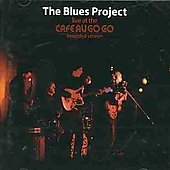 Verve/Folkways and Howard Salomon, entrepreneur of the Cafe Au Go Go in New York's Greenwich Village, presented a four-day concert series called the "Blues Bag." The evenings of November 24 through the 27 at the Cafe Au Go Go proved to be recorded by Verve/Folkways as a single in the very near future. The band has excellent vocalists in Steve, Danny and AI. This, plus their abilities to double on such instruments as the piano, organ, harmonica, vibes, flute and sitar, gives the Blues Project enormous potential. The best way to end these liner notes is to quote Robert Shelton, The New York Times critic: "Nearly a score in number paraded 10 the Cafe Au Go Go for four nights in what was the most unusual and perhaps most rewarding program of the weekend. This Iive recording session for Verve/Folkways Records was a study in the varied effects of the blues. "Of the electric bands at 'The Blues Bag', none impressed more than the Blues Project, possibly the most incandescent group in folk-rock today. (They are.) Sparked by the imaginative electric guitar of Danny Kalb, the volatile electric piano of Alan Kooper and vocal sky-rocketing of Tommy Flanders.'

It's been a while I'd like to share this one. For my part it's one of my favorite blues/Rnb album of all time.
A superb Anthology cd went out some years ago with great photos, liner notes and bonus tracks, but the compilator have chosen only few tacks of this live appearance. There are much of different versions, and some are good on both sides, but sometimes better and craziest in the live one.
It is completed with all the singles and rare tracks.
So you could enjoy this rarest gem now.
With an extra for you :
the I can't keep from crying sometimes track from the "What's shakin'" original lp compilation, available in this cd compilation "Anthology" that you must buy.