The Kliek are well respected men ! 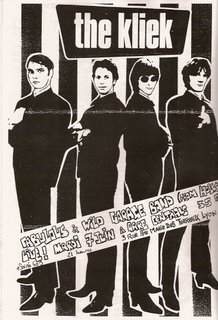 As promised, here is a unissued compilation, and a gift, from a fan for all the lovers of this great dutch band.
Here we can listen to the talent and the evolution of a so cool band formerly inspired by some 60's icons like the Byrds, the Outsiders and... the Monkees which came to the rupture when too much dissension (as usal !?).
Then Marcel krupp quit to form the Trebble Spankers, a surf guitar drenched combo, and Robert Mûtter called again his ancient pal Stefan Steutel, to make his new wild and great trio "Kek'66".

But no more balabla, come and listen to BEHIND BARS, the second lp of the KLIEK, a super effort full of great ballads, of garage folk mid tempo, which with "Feel good", the third and last studio album represents the summum of their sound and carreer. (with the first "Zitj let me staan" ep in my opinion, but all are superb anyway). 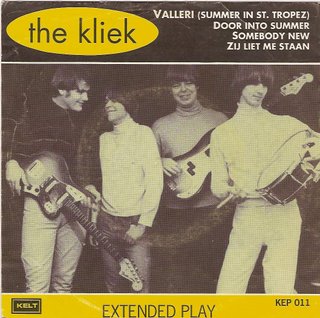 As a gift never came alone, you'll fine in bonus a rare (and non authorised, but Robert, if you see, hey!, it's for posterity !) compilation of all the singles and comps extracts the Kliek have made. (taken from my own personnal collection).

At this point, just one precision about the discography. There never been a "Across the milky way" single in 1989, as noted in some fanzines (french almost at that time). It was a live k7 recorded at the Milky way club an edited by the band's label).
For the complete disco with pictures of covers, see : veltink.org
and for a real good damn bio, go to : Kliek bio

Now, let's go, and thanks to you, the Kliek for all you did. 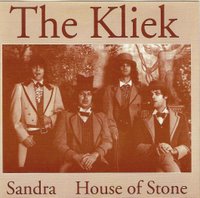 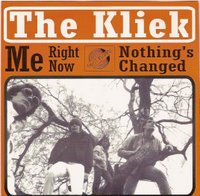 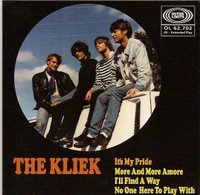 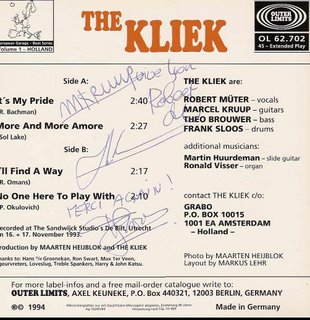 Excellent!! I can't wait! I just posted their Feel Good record on the TwilightZone...dig it below...

These cats were really one of the best garage bands around. I really dig how they mix the 60's pop with the snarly rockers - not many bands can do that or do that today. Everyone thinks its all about the fuzz. It's no wonder Ray Davies really dug em.

Yes, it's your previous post that reminded me of Robert, Marcel and the Kliek's friendship and great talent.
Just let me one or two days and there will be a great surprise !
Thanks.

Look at my comments on your post in Twilightzone, you'll understand.

hey hector,
visiting your blog every day....
till wednesday I'm on a short trip to the coast of Holland!
WOW, AND THIS IS A GREAT KLIEK COLLECTION! I am pleased already!

Thanks, but the link doesn't work!

Thanks everybody for your enthousiasm. Other great beat sound will follow. And I'm looking for putting videos too. But it's harder.

Thanks Hector!! This is great stuff!

Thanks for this post. Already had most of it, but one EP and the Larsen fanzine track were new to me.

Do you have any need for the "When Father was away (etc. etc.)" mini LP and the live album?

Already Got these cat. But thank you. Think it's not finished about the beat music. Some other sharings will be possible in the near future.

This file is gone now... Is there any chance that you can re-upload it? I only have the Behind Bars LP and I would really like to hear more Kliek records.

Sorry but none of these links work anymore. Could you please re-upload them again? Thanks! I've got a couple of their singles/EP's but can't convert them to digital. Thanks again!

Are you kidding ? I've just re-uploaded some week ago all these files. See recent post.
Cheers.

any chance of a re-up. better late than never. love the post.

turn on, tune in, and psyche out.

HECTOR, THANK SO MUCH FOR THE GREAT WORK YOU PUT INTO YOUR POST. BUT THE LINKS ARE DEAD. CAN YOU PLEASE RE-UP COOL MUSIC OF THE KLIEK AGAIN.

TURN ON, TUNE IN AND PSYCHE OUT.

HECTOR, THANK SO MUCH FOR THE GREAT WORK YOU PUT INTO YOUR POST. BUT THE LINKS ARE DEAD. CAN YOU PLEASE RE-UP COOL MUSIC OF THE KLIEK AGAIN.

TURN ON, TUNE IN AND PSYCHE OUT.

I used your "Behind Bars" traks (without your permision, Sorry and merci) to don´t rip my record...

I put all the covers and the originals in the web:

Hi Johnny !
As I wrote on your blog, I think I have to thank you for having quoted me . No problem for using my work. That's the rule on the web, and behind it, that's the KLiek's own work anyway.
You do an excellent job, so that's the way it should be.
Have a real cool time !
Keep in touch.

The Timeflies a dit…

WOW GREAT STUFF !!!
Check out the new band "The TImeflies" of Robbert Muter and Mark de Regt at:
http://www.myspace.com/the_timeflies