Yes, I know, I was away for a long time. Sorry, I had so much more occupations with my work and my other web sites or blogs.
Anyway, I realized since then that the most of my mp3 were missing from the Podemus web host and so they didn't play anymore on this site !! (Aaaarg l!)

So I 'm gonna find a solution as soon as possible, to give you again the opportunity to listen to all of them.

But meanwhile, today, for your pleasure, and as I had already announced in a previous note about the Wylde Mammoths, here are three ultra rare and never issued wherever tracks from Peter Maniette, the singer, dating back when he was 16 or so ... 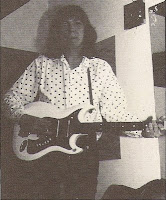 These tracks, with others from Blindshag, Crimson Shadows...etc were "given" from a k7 to me by Jens Lindberg as I was publisher of the "Here, le zine des sect maniac" in the 90's,... and were sleeping in my cave since.
I wrote at the time that Peter was not very ok to let these one appear on a fanzine, for he thought he could do better (or something like that)...
So you'll apologize Peter if you read this, but I couldn't keep no longer these little treasures apart.

So let's go back in the 90's for a pop trip from one of the coolest singer of the european garage scene, PETER MANIETTE :


Peter Maniette has thess personnal kinds of voice and style that are immediatly recognizable, and give the listener each time a melancolic feeling. He is one of my (and like many many other people I guess) favourite singer of the 90's (in the so-called "garage" scene), but his style can be more associated with Pop than real garage feel.
If we quote Jens Lindberg from his "The Cave"'s interview, we understand why :
"Peter being a very “serious” song writer was influenced by garage of course but also country, Beatles etc."

Rare are the bands of this period who have left as much significant traces in the beat field from this period, and if I might quote some of them (with the same level of discography and leaving influence or related line-ups), I would have difficulties to say, in fact..

"All our love" to Peter Maniette !

Below : reproduction of my own's Jens Lindberg interview from Here fanzine #5, dating back 1995. (in french)