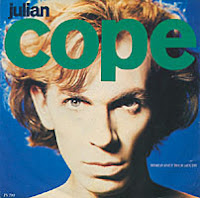 By request, the famous single of Julian. That's right it doesn't appear curioulsy in the anterior album of the same name. That's one of the rare single of Julian that hitted the charts, offering a welcomed highlight on the artist in the early 90's.

Listen to World shut your mouth Here is a very fuzzy version of the Flamin' Groovies "The slide", taken from a rare live session of 1968.
Hope you'll enjoy this maestria of raw guitar and raunchy drums, plus a loudy bass, and that you will buy the Sneakers cd where the as much good but studio version of the song came from, or the Supersneakers one where you got the whole thing.

It's "A combination of the Sneakers indie 10" from 1968 and ten tracks from a 1968 gig at a San Francisco club. (The live material had previously been issued on the French import Flamin' Groovies '68 in the mid-'80s.*) The studio tracks from Sneakers decidedly outshine the looser, more indulgent live takes, several of which duplicate Sneakers material. It's the definitive document of their pre-major label days, though, when they fused garage rock with blues, psychedelia, and the Lovin' Spoonful, complete with historical liner notes". ~ (Richie Unterberger, All Music Guide)

That's not because Soul is on Action time for some weeks that Julian has not the right to tell :
WORLD SHUT YOUR MOUTH !
JULIAN COPE
(Mercury 1984) 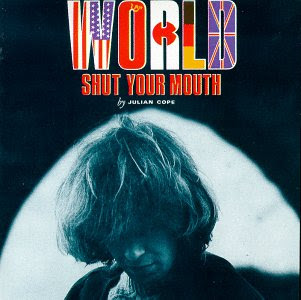 "Musician, writer, historian, and cosmic shaman Julian Cope was born in October 1957 in Deri, South Glamorgan, Wales. He was raised in Tamworth, England, and like many a young artist, suffered through academia as a perpetual outsider. In 1976, upon attending college in Liverpool, Cope found himself part of a community of musicians -- and kindred souls -- including Ian McCulloch, Pete Burns, and Pete Wylie. After various incarnations and not so amicable departures (McCulloch went on to fame with Echo & the Bunnymen), the Teardrop Explodes were formed. One of the more influential bands of the late '70s, the group delivered a volatile mix of neo-psychedelic rock and electro-pop. As the band's success grew, so did Cope's reputation for debauchery, resulting in erratic, drug-addled stage behavior that occasionally led to bloodletting. In 1983, after numerous lineup changes and legendary feuds between Cope and Zoo Records figurehead Bill Drummond, the band ceased operations.

By 1984, Cope's love of hallucinogenics -- as well as a toy car collection that occupied nearly an entire year of his life -- was at an all-time high. Despite his altered state, he released World Shut You Mouth, his solo debut on Mercury Records. An elegant collection of chamber pop and Teardrop-fueled electricity, the album divided critics and fans alike, especially upon the release of director David Bailey's macabre video for the first single, "Sunshine Playroom." (from the notes of James Christopher Monger, on Allmusic).

I'll be glad to propose later the second album "Fried" with its crazy picture sleeve included cover art of the artist in a sandbox wearing nothing but a gigantic turtle shell. And more to come... I really love what Cope is doing in music field and also his crazyness and love for the psychedelic and 70's prog music .

So you could have an eye (or two) on his super book Krautrocksampler published in 1996 by Head heritage and Kargo & Eclat in France in 2005.

See also his Krautock top 50 at Groonrick list on Rateyourmusic.

Jean-Paul is a very Soul man ! 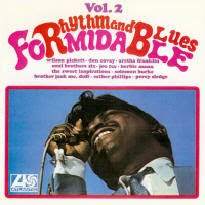 and I already talked about his excellent site Otis Redding french site dedicated to the late Otis and the Soul in France in the 60's on a previous blog (le Blog d'Hector). But you got ("gotta gotta !!...") to go have a look on it because it' s incredible and too much ! You will find all the sleeves, all the discographies, and all the Formidable Rhythm'n' blues comps !! Yes, these vinyl ones never reissued ever !! 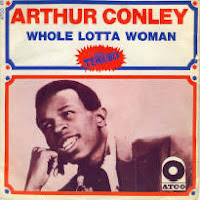 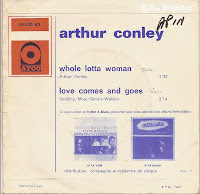 Thanks for all your work Jean-Paul !
Publié par Hectorvadair à 19:34 Aucun commentaire: 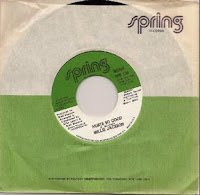 Seventh single for Millie, and sixth for Spring Records, this A side Hurt so good is taken from the Cleopatra Jones soundtrack, and it's a great but vicious (so, so funky !) ballad. Millie knows how to make understand what she's thinking about... and it's gooood!

The album It Hurts so good has just been reissued some months ago with bonus, so let have a trip on dustygroove or elsewhere to buy it. 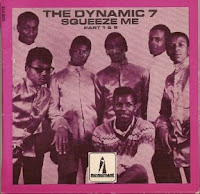 Again a rarity. No infos on this great funkgroovers in 2 parts, except these lines :
"A division of Nashville’s Monument label, Sound Stage 7 was managed by the late John Richbourg, who was also a popular disc jockey on WLAC, the Nashville radio station that brought Rhythm and Blues to the masses during the ‘50s. If he thought they had potential, Richbourg would often pick up masters from smaller labels and independent producers. This locally-recorded, horn-fed jam was just such a recording and the fact that it’s still pretty easy to pick up is evidence that it sold in good numbers. Originally in two parts, this is the uncut mix. "
(from Superfly Soul: Return Of The Hustlers /Subtitle : Super-Bad Ghetto Funk From Across The Tracks ) (Various Artists, double CD Cat. No.: METRDCD527) 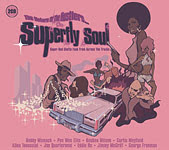 *More infos on the Monument Label (albums only) at : bsnpubs.com

Again, and by request this superb and rare album of ancient Rhythm 'n' blues. 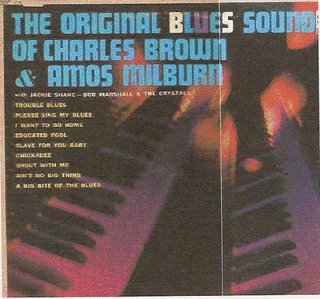 I get a feeling 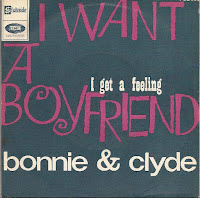 No large info on this cool 45's on Stateside, except that I buyed it some 10 years ago at a friend, because of its great soul vocals. More, the title "I get a feeling" and its sentence "I get a feeling when we are dancing" is an hymne to the soul spirit.

The female vocal arriving in a second time is incredible... and I stayed so long asking myself whose it was.
Yeaaah thanks to Internet and Soulfulkindamusic, I have now the answer and what an answer it is.

This single issued on the Stateside label of EMI in 1963 was from the original US "In sound" label apparently and the identity of his singers is given (in some way) by the credits : Robert D. Jackson.

Bonnie & Clyde are in fact : Brenda Holloway & Robert Jackson (Brother Of Gloria Jones). So it's one of the singles Brenda released before 1964... before signing to Motown. cqfd

Pretty rare you said ? yes it is. And it's so good.

I get a feeling (B side)

The buzz of Rocky ! 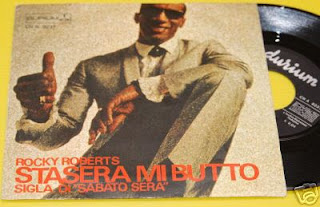 Strange kind of person, this Rocky. First time I've heard of him was on the French Disco revue 60's mag (the specimen).
I told myself : "Waouh ! it looks and sounds cool'". But I soon realised it was hard to get an ear on his stuff. Rocky Roberts and his airedales is the kind of band who made a big part of its career in Italia, and that's the reason why we saw him often in Paris at that time.
He made a lot of records, all collectors now, but not all the stuff are must have..
I had the chance to put my hands on some of them, (Thanks Claude) so I decided to share the best of this good northern soul stuff here. Enjoy right now !

This US R&B band arrived in Italia following the incredible success of their T-Bird single (a cover) which became the jingle of the Bandiera gialla radio broadcast. Rocky Roberts became a casual of this and he soon assumed good shows on TV and on records proposing a famous italian Rn'blues style with "Stasera mi butto" and "Sono tremendo".
The other famous men of the Airedales were Doug Fowkles (the founder), and Wess Johnson, the bassist, who remplaced Rocky on vocals first, presenting songs in italian in a second period.
(from italian Musicamemoria site.)

Listen to Can't ask no more :


Listen to Just because of you :

Bonus :
A page on the death of Rocky Roberts (in italian)
who has passed away in 2005. 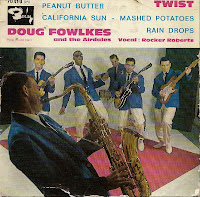 Here we go again with... 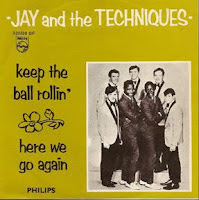 This copy is the Belgian pressing, showing just a piece of vinyl placed in a thin folded paper. No back cover.
The A side is an entertaining soul variety track, but with no real impact, while the B side is a real good northern soul winner, ok for the dancing. Good rhythm, good voice, even if at the limit; cool chorus, and a groovy organ. Sometime as a french guy I'm telling myself Laurent Bauer from the late Bogeymen should have cover this one. 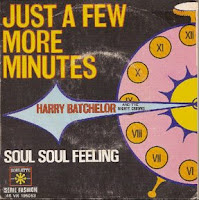 I had time for thoughts this week-end.
And after my last note, I told myself that I could share my collection in a better and easier way than absolutely complete albums each time in doing here what I have already done on le Podcast d'hector. Put some good (and rare) singles on Action time.
More, Mephisto's rock gems gave me the energy, so... beginning with my favorite soul/funk/rn'blues 45's....

No info on this very good funky piece, with fuzz and loud organ, just that Harry Batchelor apparently have played with one of the first Jimi Hendrix/ Billy Cox band "King casuals" in 1962, and that it's pretty much collectable. Have a look on Les groupes de Jimi site
where I found this photo. (Harry Batchelor is the singer). 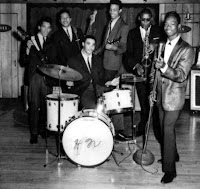 One time again, the B side is the better.

Time to make a point

Well, it's amazing how great this community is.
I remember it's been about one year now that I have discovered it, thanks to a chronicle in the french Liberation newspaper.
I was at that time searching for an album of the Things (paisley band), and I felt onto Twilightzone. What a shok !

Since then I have joined this and I do as much as I can, because I'm also into comics and multimedia things at my job., But it never stops to surprise me each day. My goal is not, like someones do, to put all my discotheque on the blog, it has no sense for me, but sometimes, I think of one thing that can be interesting to share. Sometime I have a little more time and I ask myself, is that lp could interest somebody ?
In fact I have thousands of vinyls (in big part) that sleeps in cases, and that could be uploaded here. But that's no way. I let time to time and it will happen what it will happen ... someday.

I am a Soul lover, and even If I buy, like the larger part of the users of this community ,a lot of records (or may I say ; I had buyed a lot since 25 years), I cannot afford myself put again and again more records on the living room or in the celling.
So do I download regularly some stuff here and there, but always with reason, and always leaving a comment.

The people who are under each blog are often (if always) great and it's a pleasure for me each time to read the notes and to enjoy the music. Some are bigger and nicer than others, but everytime I discover something, and that's the real gaz !!

You can't stand alone, (Pickett), by the Out Four.