"It may not have the hip thing to do at the time but Shoes carried on the pure pop traditions of the Beatles and the Raspberries during the late '70s and early '80s with a charming innocence and execution unmatched by the more derivative bands lumped into the category "power pop." 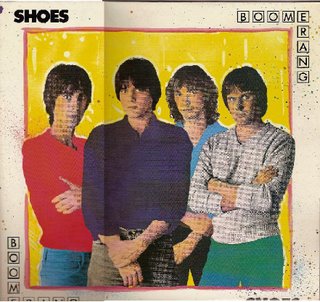 Shoes was formed by in Zion, IL, in 1975 by Jeff Murphy, John Murphy, Gary Klebe, and Skip Meyer -- the Murphys and Klebe all sharing songwriting duties. After one self-made and extremely limited album (only 300 were pressed), 1975's Un Dans Versalles, and the unreleased Bazooka (1976), they recorded their true debut for national consumption, Black Vinyl Shoes, in Jeff Murphy's living room and released it on their own label, Black Vinyl Records. Though it was barely distributed, enough critics and key people heard the record to start a word-of-mouth buzz. Eventually, Greg Shaw, the head of Bomp! Records, heard the record and arranged for the band to release one single, the brilliant "Tommorrow Night"/"Okay," on his label. A contract with Elektra Records soon followed. Elektra released the group's next three, textbook power-pop albums: Present Tense (1979), Tongue Twister (1981), and Boomerang (1982). Despite the instantly accessible, catchy quality of the songs, they were unable to achieve mainstream success -- among specialists however, these albums, along with the debut, stand as the high points of the era" (...)
(by Chris Woodstra from Allmusic.com)

You can read a whole interview of Jeff Murphy of the Shoes on :Perfect sound forever