Being black and being proud !

The struggle of Juke Boy Bonner. 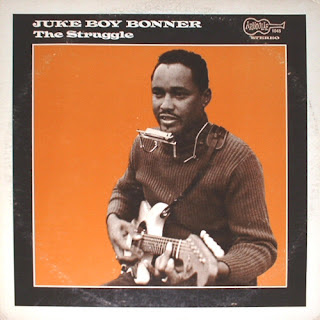 It's been quite three years I discovered this good folk blues album, and his creator, thanks to my friend Claude. It's kinda a mix between the first J. L. hooker's lps from 1945, Lightning Hopkins... and something with soul.. You'l tell me.
Anyway, it was time to ripp it from the vinyl (deutch edition), and to share it. In the meantime, it has been edited again in France on CD, but that's the way God planned it, hu ?

"Weldon "Jukeboy" Bonner sings of his fhis struggle to live a meaningfullife in mid-century America. While many might not see this struggle as worthy material for song, Bonner's life has indeed provided ample resources for fine lyric writing .
He has had to fight his way through one of the most competitive markets in the world, the Black Ghettos of the Urban South. The only way to survive in the Ghetto is to have a good "hustle". A "Hustle" can be anything from a legitimate job at the Post Office or P.O. as it is called in the Ghetto; to running a Policy game bank in sorne off the beaten track beer joint. A "Hustle" is how you make it, how you put beans on the table shoes on the kids' feet and clothes on your back., it is a living.
Weldon Bonner's hustle is the blues.

The Blues are still popular with a portion of the black audience in Houston.
Fifth ward, Acres Homes and Sunnyside are still eager to support the Blues. But this doesn't automatically mean that the bar owners hire Bluesmen.
The Jukebox is cheaper and attracts revenue of its' own. The Bluesman has to hustle to get work. And he is not alone in thishustle, there are many small rock and "Soul" bands eager to play for peanuts just for the exposure, hundreds of neighborhood singers who will sing along with the Jukebox for a few free beers, lots of local clowns, dancers and monologists who will entertain at the drop of a hat. So Weldon has to do a selling job of the first water just to get an audition.

The going rate in Houston for live entertainment is from $15.00 to $30.00 per night in the small blues clubs. If a performer can average $25.00 a night he is lucky. To do this it is necessary to'play for afternoon dances and on early evening gigs. Weldon has made as many as four gigs in one day in order to earn his living.
It is a constant battle, findinf the club owner or house man as he is called; an audition generally before a live audience, no pay naturally; the hassle to determine the rate of pay and then the nightly worry about Payment .This is Weldon 's hustle.
This is a Bluesman's life in Houston today.
"Jukeboy" has faced this battle for the last ten years, It is part of his struggle.

This is a strange existence for a poet, yet no stranger than the pubs or Ireland which sheltered Yates, Devlin and Kinsella; no different from the saloons of Seattles' first avenue which gave solice to Theodore Roethke; not too much different from the many smokey bars inhabited by Dylan Thomas. 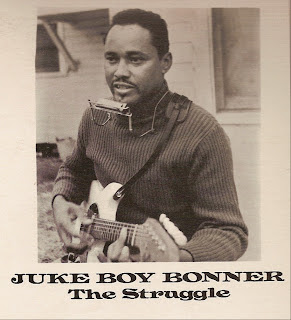 I am sure that there are those who will not accept the idea that a Blues singer and writer can also be a great poet. There is actually little else you can justly cali the Bluesman of today. He works with form, imagery, rhythm, meter and rhyme. He abstracts experience verbally and adds the element of beauty to finished product. He is a poet by almost every accepted definition. This album captures Weldon Bonners' struggle in his own poetic expression. It is almost a total capsulization of his last ten years and his life as a professional Blues singer. Listen to songs like "Over Ten Years Ago" in which Weldon tells of being down and out in Los Angeles. A happy accidental meeting with Mercy Dee, a fellow Texas Bluesman, takes him to a meal and a place on his show. "Struggle Here in Houston" and ''l'm in the Big City" each tell us more about Ghetto life today than hundreds of dusty books written by college professors who are more interested in counting noses than helping or understanding people. "The Struggle" is one man's story but it has applications for ail men. Weldon uses James Brown's ''l'm Black and l'm Proud" theme as a starting point for his own song, "Being Black and l'm Proud". Weldon's view is a bit more analytic and incisive than Brown's. Jukeboy asks for respect from his fellow Blackmen. He states that the Blackman must begin at home with sorne corrective thinking about blackness and Black pride before he can demand respect from the white community. This is definitely not a patronizing kind of self criticism, it cornes from pride and from understanding and from a painful kind of honesty that so often characterizes Weldon Bonner. To illustrate the timelessness of the Blues form and at the same time the flexibility and irnmediacy of the Blues experience, Weldon has included a song in this album that was actually scheduled for a later effort. "1 Got My Passport" is a graphic description of a problem that the average white can't even conceive of, the grating of a passport without a birth certificate. They simply did not worry about Birth Certificates for Black Children in Beeville during the early 30's. But try to get this across to officialdom, a Blues in the making. Weldon did secure his passport and will be visiting Europe during the fall of 1969 with the American Blues Festival. This album is the document of a struggle, a stroggle that is going on right now for Weldon "Jukeboy" Bonner and about 20 million other b1ack men and women ID America.. It is a document that is both valid as art and entertaining as music here is a document of black experience and blues ideas. The struggle is weldone with Juke Boy Bonner.
(from the original Notes of Larry Skoog)

All songs by Weldon Bonner @ by Tradition Music Co. (BMI)

Juke Boy Bonner vocals, guitar, and harmonica; Alvin 1. Simon-drums.
Recorded at ACA studios in Houston, Tex. on November 30 and December 2,1968 except for I GOT MY PASSPORT and OVER TEN YEARS AGO which were recorded on May 5, 1969. Bill Holfordengineer.
Produced by Chris Strachwitz Caver: Wayne Pope
Cover photo Chris Strackwitt

The complete disco of Juke Boy Bonner on :
http://www.wirz.de/music/bonnefrm.htm

Struggle here in Houston
Railroad tracks
Watch your buddies/I got my passport (on the same track sorry)
When the deal goes down
Being black and I'm proud
I'm in the big city
Houston, the action town
Over ten years ago
Running shoes
Just a blues
It don't take too much