Garage rock fanzines from all over the world (some) 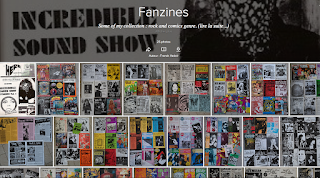 If you love fanzines, I think I have something for you.

...I discovered fanzines via my brother in the early 80's. He was a suscriber at Black and white zine, the newsletter of the Stranglers, and buyed many french zines from the 80's, among Nineteen.
The Flamin' groovie's one showed here, and Bomp were his own.

I guess I began buy and collect personnaly in early 1990, with Larsen, french rock zine, and
Groovy eyes.
That's Groovy eyes that gave me the passion and energy to make my own in 1993.

Enjoy these photographs, my tribute to all of these creators, cool and energic contributors to the rock and alternative scene.

(Clic on the image to go to the album)

nice collection !
now i read dig it!, rock hardi and bananas mag, do you know other garage fanzines ?
(ox is too punk for me)
cheers
chris

I agree that's a mighty fine collection. Wish I owned that many! Have you considered scanning and sharing some of them for those of us less fortunate?
- greg

Hi. Thank you for your kind words. But ouch ! I am not equiped to scan easily So much pages. A yway, If some specific articles could interest you, perhaps... Cheers !