I wish I had answered 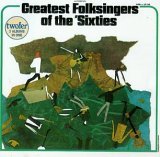 "Launched in the late 60s, originally, this was a budget-priced ($5.98) series of double disk "best-of" recordings in gatefold sleeves, instantly enlarged to include several originals and spoken word recordings from their backlist. The design was Vanguard's rote Colonel Parker marketing ("Give 'em a picture of the boy and his name") file-shot/name formula which nonetheless gave Vanguard a distinct look. There was generally no text inside, the center fold being a collection of small photos or a large one - generally blurry". (from Greg Pennell of Farina Files1)

I wish I had answered by the Staple Singers is a great song full of soul that you can find in the magnific compilation Great folksingers of the sixties
My personnal one is a french vinyl edition, with an orange sleeve, but it's the same inside. It's worth the buying.

Enjoy this track right now : I wish I had answered