Garage rock international revival : the book is not written yet ! 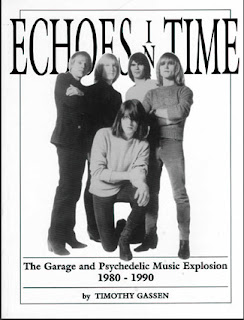 As I was writting about Garage music on the french Wikipedia accurate page, I had to make reference to the book The Knights of fuzz, wich is considered by many fans as a "passage obligé" (in french in the text).

But the question was : "What better work have we in our hands to compare ?

That's the question Hans-Jürgen Klitsch, from Hartbeat fame german fanzine had asked himself, in a paper named "I read therefore I bite", on his #20 issue of Hartbeat, back in 1997. I don't know if many other original reviews has been so critics, but it contains in my opinon its part of truth. 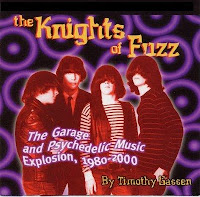 The fact is that The Knights of fuzz, (Borderline publishing 1996), previously edited as "Echoes in time" in 1991, by author Timothy Gassen, (from Marsmallow Overcoat garage band), then by Purple cactus in 2001 under a CD-rom shape, (right), then under a DVD at Dionysus label in 2006, was awaited in 1991, and a good beginning to people who didn't know about the subject at that time. But it has never been updated seriously back then, although many bands appeared between 1996 and 2006 ! And so did the fanzines...etc.

The book overrated some bands, and a large part of only Mr Gassen's other countries acquaintances... The discographies never were updated, nor the bands listing, as for the French ones.  How explain at this point the lack of Larsen, for instance, and the Slow slushy boys, from Chambéry, one of the most productive band in the 90's here, and behind the Larsen label ??

...This book began a CD-rom, then a DVD, as a commercial product, but the whole story of international revival Garage rock from 1979 to 2000s is still to write, and now better decrypted on line via Internet on some fanatics blogs.
A labour of love that some european people have begun, as for Joachim from "They could have been bigger than EMI", or on  Declaration of fuzz, Paradise of garagecomps, or Caveman blogs ...for examples.

Hope it will be done properly someday (soon ?), as the story is interesting, and enjoyable.

Read : the extraordinary work of Jolete macana, who have began the cataloging of many garage fanzines : http://www.ipunkrock.com/index.php/site/fanzines. Amazing !