Not lost for everybody .. the Kinks ! 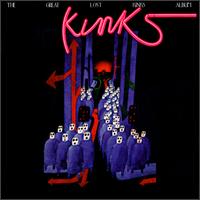 The Kinks are alive, and well. That's what Hector tells here, talking about the "Great lost Kinks album" from 1973, a fine collection of ballads for much part, worth to listen.

"An aptly titled collection; out of print for many years, there are even some Kinks cultists who have never been able to hear this ragtag but worthy collection of late-'60s and early-'70s outtakes and rarities. Most of these were recorded around the same time as the 1968 LP Village Green Preservation Society; these low-key, wry, bouncy tunes would have fit in well with that record. Lyrically, they're on the whole slighter than much of their late-'60s work, perhaps accounting for why the group did not deign to release them at the time. Still, songs like "Rosemary Rose," "Misty Water," and "Mr. Songbird" would have hardly embarrassed the group, and rank as the highlights of this anthology. Besides 1969-era outtakes, it includes the single "Plastic Man," a couple of okay, way-obscure B-sides featuring Dave Davies, and some songs penned for long-forgotten film and television productions. It also has the dynamite 1966 B-side "I'm Not Like Everybody Else," though that's easily available on reissue these days. That's not the case for most of the rest of this album; Kinks fans will find it quite worthwhile, and should be on the lookout for it in the used bins." (Richie Unterberger, All Music Guide)

Is there any problem with the RAR file ?
I only see one track in it.
The other songs seem to have been definitely ... lost ! ;)

Arrgl ! I thought it was so speed wasn't it.
I understand now.
Ok, Get me some times and I make it correct.

Ok, that's right this time. I mad a mistake on the used file . Sorry for the desagreement.

I have been looking for sites like this for a long time. Thank you!
» »

You're welcome !
Have you enjoyed the other stuff ?

This is very interesting site... »